The ABPC mk.II (Automatic Bullet Puller Conjay) was specifically developed to fill a need to be able to dismantle larger-calibre small-arms rounds quickly, safely and efficiently.

The traditional method of kinetic pulling was not really practicable as the forces involved are too great to be applied by muscle-power for more than one or two operations and the large impact forces are not conducive to safety.

The ABPC is a self-contained freestanding unit powered by compressed air and uses a specially developed system of levers and collets to generate the large forces required to hold the bullet without marking or damaging it, while simultaneously pulling the case away under full control with no impact or spillage of the powder charge.

Operation is simplicity itself – the collet and shellholder for the desired calibre are inserted into the machine (no tools required) and a round slipped into the shellholder. Pressing a button raises the ram and the bullet is brought into the collet. Next, pressing another button closes the collet to grip the bullet and the last button causes the case to be pulled downwards and separated from the bullet.

Releasing the buttons allows the bullet and case to be removed and the next cartridge inserted. With a little practice, the whole cycle can be completed in a matter of seconds and with no operator fatigue, even after many cycles. 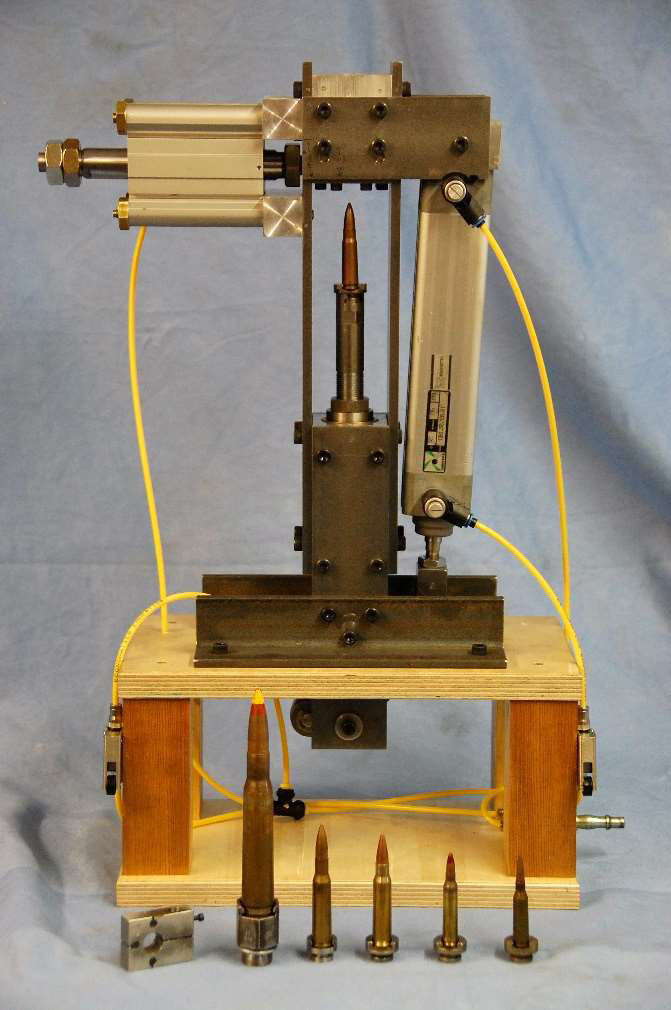 The machine is powered by compressed air, and air usage is low so that even a very small portable compressor will suffice. The compressor can be placed some distance away, so there is no danger of electricity or sparks being anywhere near the exposed powder etc. thus ensuring safety.

Despite the large forces generated (up to 900lbs clamping force and 1,600lbs pulling force), they are completely self-contained within the machine and there is no need to securely mount the machine to a heavy worktop. It can be placed on a tabletop and used pretty much anywhere.

It will work with all calibres from 14.5mm Russian down to small pistol calibres, though it comes into its own for the larger calibres – .50 BMG, 12.7mm and 14.5mm Russian which cannot otherwise be easily and safely dismantled.